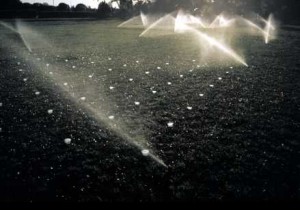 Cup catchment is the way to determine irrigation uniformity and precipitation rate.  It should be done for a timed duration under typical wind speeds and with numerous cups.

Q: How much water does it take to grow St. Augustinegrass lawns in South Florida?
A: On average, 43 inches per year, which is less than the 60 inches available in rain.

Q: So why irrigate?
A: In South Florida, from March to May, there is a dry season with less rain each month than the St. Augustinegrass needs to live.

Q: How much irrigation is needed to keep St. Augustinegrass alive?
A: In a typical year, depending on the timing and amount of rain, the lawn needs to be irrigated to supplement the water deficit in March, April, and May. The number of applications required is about 3, 4, and 6 irrigation events of 3/4 inch each in March, April, and May, respectively. If it doesn’t rain a drop, the turf needs about 5, 6, and 7 irrigation events, respectively, in each of those three months. During most of the rest of the year South Florida lawns need about 2 irrigations per month because there’s plenty of rain.  And in December and January it’s cool enough that we might not need to irrigate at all.

Q: Is this true everywhere?
A: No. This is based on well drained level areas near the water table. In urbanized Miami-Dade and Broward Counties, the water table averages 4.5 feet depth, which is close enough for some moisture to wick up through the rock to the turf roots. Some areas are wetter or more protected by shade, while the coastal ridges, hill mounds, and areas near the pavement and near the prevailing winds tend to dry out faster.

Q: If the turf doesn’t get watered, will it die?
A: Yes, eventually St. Augustinegrass will die. Let’s say it doesn’t rain a drop, and the turf starts to wilt in the late afternoon, but it looks okay in the morning.  Within about 7 days the turf will continue to be wilted in the afternoon, but when you look at it in the morning, it hasn’t recovered, and it’s remained wilted all night and all the next day. Now you’ve got about 7 days before the lawn is dead brown.

Q: Only fourteen days doesn’t sound very safe.
A: It’s very likely that there will be some rain.

Q: What about spraying the turf with an antitranspirant or putting some superflexology geewhizmo polymeric soil body conditioner to the soil?
A: It’s your money. Why don’t you just put the money in the soil? More seriously, plants have been at the business of growing for several hundred millions of years. They haven’t figured out how to grow and exchange carbon dioxide without losing water at a comparable rate. Those two compounds have the same diffusion properties, and there are no synthetic materials that can change the basic physics. Also, the turfgrass has essentially no internal resistance to water exchange. It acts as a soda straw, driven to lose water based on the heat energy from the sun. When you heat a pot of water, the water converts to a gas. When the sun shines on the leaf, the water converts to a gas. Same process.

Q: What about the irrigation system? If we only have a few hours per week to irrigate, shouldn’t we make those hours count?
A: Right. Irrigation systems tend to be poor in distribution, and this is corrupted by wind. A thorough audit of your sprinkler system will reveal some things you can improve. Also, Try not to water when the wind is blowing strong, say, more than about 5 miles per hour.